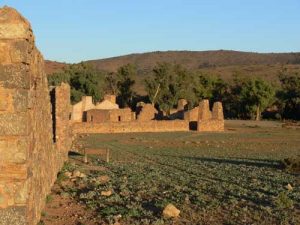 The inscription on the headstone

The wall protecting the homestead from invasion.

This book contains the story of the death of James Bole

James Bole’s, Mother Margaret is buried with him.

Hugh Proby’s father was Admiral Granville Leveson Proby a sailor with a distinguished Naval career, having fought with Nelson. His parents lived at Glenart Castle.

Hugh came out to Australia with John Probyn his childhood friend, in the SS Wellington which arrived in Port Adelaide on 30th May 1851.

Hugh’s first run Lease No.74, called the Moockra Range Run (later it became Coonatto Run), this included what is now known as the Horsehoe, and is dominated by Moockra Tower or Peak as it was called Hugh’s day.

Hugh only had a few huts built on the Kanyaka run, after Hugh’s death a Mr. Phillips started to build the many solid stone structures, which were to form the present day ruins of the Kanyaka Homestead.

Hugh and a native stockman were on the western portion of the run with cattle, during the night of violent thunder storm came, causing the cattle to stampede, the two men saddled their horses and rode out to the mob, the deluge caused a flash flood in the Willochra creek, it was while attempting to cross the creek, possibly in darkness that Hugh was swept from his horse and drowned.

His grave is not far from where he drowned, six years after his death his family had a tablet of Scottish granite shipped out, from his home land, it was hauled to its site by a bullock team, from Port Augusta, experts have estimated the weight to be one and a half tons, at the turn of the century his sister Lady Hamilton cam to Australia to visit his grave.

Hugh Proby is not buried in the Kanyaka Cemetery, his grave is located near the side of the Arden Vale road between Quorn and the ruins of Simmonstown.

The book “An Earl’s Son” is Hugh Proby’s letters, it is available through our online shop, we only have a few copies left.

In the Kanyaka Cemetery are a number of graves, one of which is shown in the image gallery above, James Bole.

Margaret Bole (Menzies) died at the age of 52 in Port Augusta and it was her wish that her body be taken back to Kanyaka and buried with her son.

The story of the death of James Bole and also the story of Gordon and area is in the book “Only a Madman“, the cover shown in the gallery above and is available in our online bookshop.