A Memorial to the Early Pioneers of the Hawker District 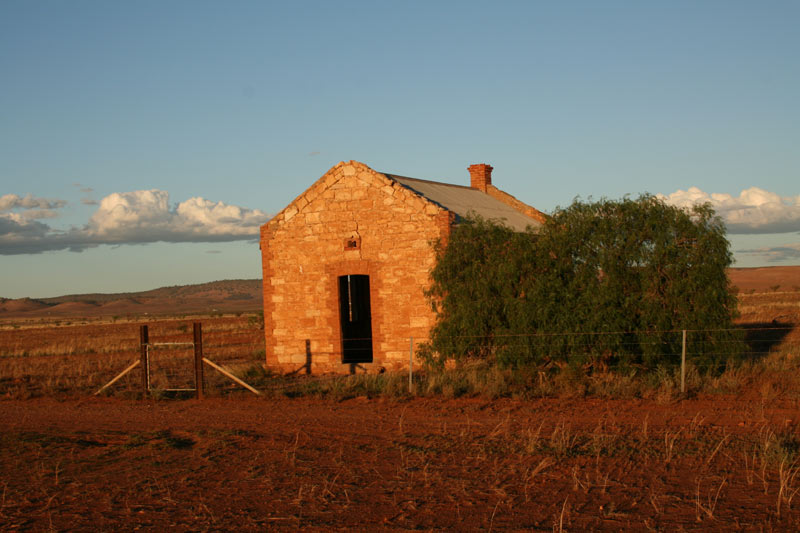 The North Arkaba School is situated on the right hand side of Wilpena Rd, 10kms north of Hawker.
The school was built after Mr James Sweet, an original pioneer, provided .2 ha of land, in 1888, under trusteeship.
The one teacher school was open from 1888-1918 and 1932-1941. A wood fire provided winter warmth and in summer the only respite from the heat was cool drinking water from a canvas water-bag. Students sat at four long wooden desks with ink wells. Junior classes wrote on slate with chalk. The only period where the student levels exceeded 20 was in 1897 and 1898.
Marbles, hopscotch and knuckle-bones were popular games enjoyed by the children.

Ken Sweet, great grandson of James, can recall riding a horse to school in the 1930’s and leaving it tethered in a nearby yard while attending lessons. Other students drove buggies, however many walked up to 8 kms to and from school. Ken can also remember the wonderful music played by Fred and Alf Groch on their piano accordions for dances and social events. Local members of the Wesleyan Church used the building for worship from 1888 until cessation of services in 1928, at which time the church people remaining in the area attended services in Hawker. However in 1943, when petrol rationing became an issue, the church goers that lived in the Arkaba area decided to again conduct services at the School which had closed 2 years earlier. The School then became known at the North Arkaba Methodist Church. On occasions night services were held under the light of two hanging Miller lamps (kerosene lamps with glass surrounds). Music was provided for services by organists from local families until closure of the Church in 1955. The facility has remained closed since. The 125th Anniversary of the building will take place in 2013.
It would be a wonderful tribute to the early pioneers of the area if the building could be renovated and preserved for the generations to come. Malcolm Sweet Great Great Grandson.

Ken Sweet working with his horses.